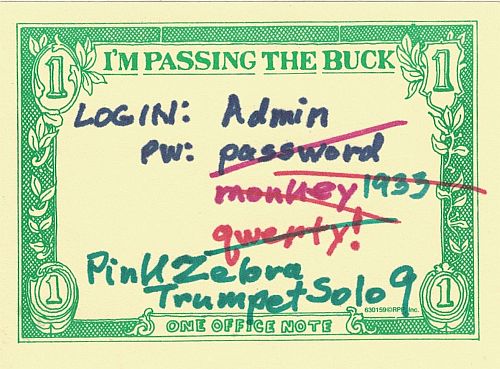 Who wrote the rule that says that passwords should have “both upper and lower-case letters, a number, and special characters”? And that they should be changed every 90 days? And that it’s OK to verify a password change by asking questions that anyone on Facebook could look up?

Well, that was NIST, the National Institute of Standards and Technology. And they’ve removed those rules. They’re as obsolete as using ‘monkey’ for a password, and that’s good, as the rules and the monkey were both just nonsense.

This is, of course, based on stupid. Lots of it. Here are the basic assumptions, all wrong:

They don’t, and it changes the math. If you told them, “I only use upper case”, well yes, that speeds up guessing. But they don’t know if you used all available characters, or three of them. Forcing us to use ALL those character types doesn’t add any security–a brute force guessing program won’t know which characters to guess.

Most of it is government lawyer-babble, an extreme case of what they call ‘terms of art’, and it spends a lot of pages on what standards and rules apply to what type of activity.

The recommendations include these items, all sensible:

What does this mean for us?

Well, it means that “ZebraInTheCornfield” is a higher-security password than “f0OT6a11”, and it’s easier to remember and to type. And ‘monkey’ isn’t allowed, ever. Choose your passwords accordingly, with phrases of at least 16 characters that are easy to remember, but not something anyone else would know.